I can’t resist a pun. Particularly if it’s a very good one, or a very, very bad one.

This is a very, very bad one. 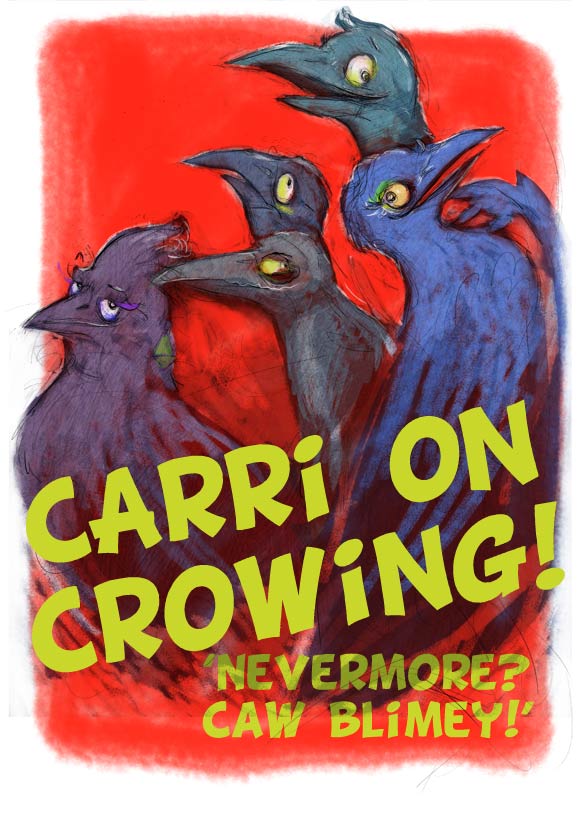 Personal stuff – just saw a feather and thought that it would be nice to paint it.  I’ve collected up a few more, but the prevailing colour scheme of light grey, brownish grey and dark grey makes me suspect that the feral pigeon provides most of the source material.  I live in hope that one day something more decorative will fly past – we do get parakeets round here, but they don’t seem inclined to moult. 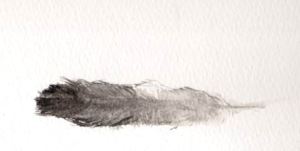 Forgive the ropy scans.  It has been a bad day.

I haven’t been very good at finding time to draw lately.  You, know how it is, the twins are refusing to settle at night, then there’s the teething, and trying to cook tea with a wailing baby attached to each leg, and then there’s the oldest who wants your help and wants to play a game and there’s the worksheet from school to fill in, and tax stuff, and on top of that, we’ve got the builders in to give us a little more room because there’s five of us in a small terraced house and, and, and… excuses, excuses.

Anyway, I haven’t been very good at finding time to draw lately.

Well, that is except for when I found myself with little else to do except tend to the youngest baby, read and draw.  This, unfortunately, was because he was in hospital with a chest infection.  He didn’t seem so very ill at a glance, but the doctor thought differently and sent us off to the hospital, where the machine that went ‘ping’ said differently, and poor Benjamin spent three days on the children’s ward, being excellently cared for.  May I put in a word for our lovely and magnificent NHS here?  It wasn’t just the medical care – everyone had a smile for Benjamin, and the ward was excellent, with a play room, and a sensory room, and staff and volunteers who tried to make his and my stay as cheerful and comfortable as possible.  I’d also like to put in a word for my husband and mother and friends who all rallied together when what was meant to be a quick check up turned into a minor saga.  I would also just like to add that it is quite difficult to keep an oxygen tube on a baby who has decided that he doesn’t really want it, particularly after he’s started to pick up and has got quite wriggly.  The thing is, I wouldn’t have changed a minute of it, because you know, it’s your child, and you want to know they’ll be OK.  I just hope everyone knew how glad we were of their care for Benjamin, and for all of us as a family. 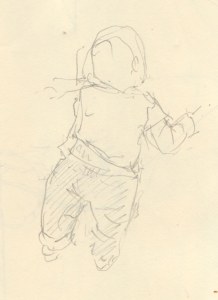 The first Terry Pratchett I ever read was (I suppose appropriately for such news) Mort, and I remained hooked on Terry Pratchett’s books for the next 25 years, and shall do for as many years as I’ve got left.

It was so damn funny!  But I like funny books.  It took a long while to realise why unlike many others, Pratchett’s books lodged in my brain and refused to leave.

There was that sense that a vast amount of research and knowledge had been packed into each book – not that you ever got beaten over the head with it (“…as you know, Bob…”), but I loved it when I spotted references to folklore, literature, film… and I’m very sure I never even noticed half of them.

So, they’re fantastic entertainment and the product of a huge intelligence, but one aspect that elevated them above the usual run of humour was that you could always tell that he cared about human beings and the wider world they lived in, knew how their thought processes worked.  He pointed out the layers of fluff we use to insulate ourselves from reality, but understood why we spin those layers for ourselves.

Most of all, there was the palpable sense of anger that rose from that care for humanity, and a desire for social justice.  It was anger at those who treat people like interchangeable spare parts, or where a society is set up to benefit the system, not the people who live in it.

Make that a huge, compassionate and humane intelligence.  With a genius for silly names.

From Reaper Man, one of my favourites (actually, they’re nearly all my favourites, if this is a possible thing): 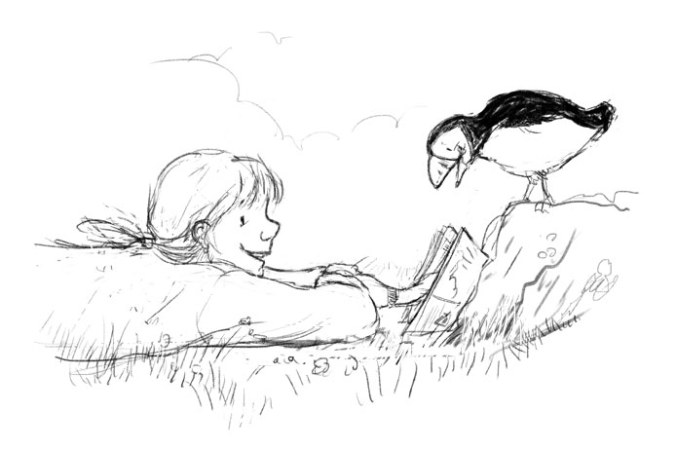 …from Elen’s Island, which is out now!  Makes an excellent gift for friends and family!

A very quick sketch (executed with sleeping infants on lap) of Elen and Captain Beaky to celebrate World Book Day.  Hope you have a lovely day, and find some time to read a good book!

…that’s my excuse for the latest posting hiatus.  Busy with babies and books.

The twins are crawling and pulling themselves up now.  As far as they are concerned, everything is up for grabs and once more, all our precious things begin their slow migration up the shelves to safer heights in a sort of breakable-object version of transhumance.  The five-year-old just needs to remember to pick his toys up now, as Peso the Penguin didn’t appreciate his experience as a chew toy.  Not at all what he signed up for when he joined the Octonauts.

That’s the babies.  Now, books!  A while ago, Janet at Firefly Press asked if I’d do the cover and inside illustrations for a book, and I said yes, and I did the cover and the inside illustrations and they’ve just got the completed book back and it looks LOVELY (blows own trumpet).  Of course, the story is wonderful, which is one of the things that made it so enjoyable to illustrate.  It’s about a girl called Elen, and while her parents are away, Elen goes to live with her grandmother on a lonely island, and neither of them is particularly happy about it.  Despite this rocky start, Elen discovers that the island has its own magic, with secrets to be discovered and friends to be made.  There is also a puffin.

Here’s the cover, and some of the line illustrations I did for the inside.  Point of very minor interest: for a while now, I’ve been diluting my ink and building the line up by re-drawing over it several times to get a softer, fuzzier line, but for this one it’s been really nice to sit with a brush and a big bottle of Kandahar ink and a cup of tea and just GO for it! 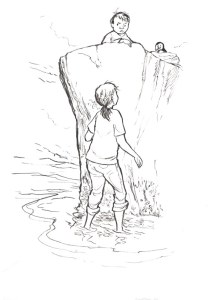 A happy and peaceful Christmas and new year to you all!

It’s been the usual big gap since last I posted, but this is because of two reasons, and they’re three months old now.  It’s been a bit frantic of late, especially as they think that sleeping is for LOSERS and WIMPS, but they’re our gorgeous boys and snuggly and milky and lovely and they’ve started smiling quite a lot now so yeah, I think we’re going to keep them.

However, I am still managing to put pen/brush/stylus to paper/tablet because it makes a nice change from being knee-deep in nappy sacks and sodden muslins.

So here is my salute to the summer.  It’s partly based on my remembrance of holidays consisting of packing lots of people into a Volvo, then packing bags round the people, then the people most tightly packed in being travel sick.  It’s been long enough now that it just about qualifies as a fond memory.

We bought a barbeque recently and, naturally, the weather promptly turned cold.  Since the whole purpose of a barbeque is to sit outside with a drink with lots of ice cubes in it, and poke burning food with tongs, we’re hoping that an un-English summer is just around the corner.

In that theme, I’ve added a new picture to the website, with the family above having a nice time cooking outdoors in the rain.  I felt sorry for them.  Every time I’ve drawn them, they’ve ended up having a bit of a rough time on holiday, so they needed a break.

Also, hope you like the new look.  I’ve got to jimmy the header round, but I just fancied doing some redecoration.

As it says in the title: it’s a car, with tentacles.  It’s the nearest I could get to the image that drifted very briefly across my mind whilst I was dropping off to sleep.  I have some quite nice/odd ideas that way, and dreams provide a few more, when I can remember them (see Value Shark Milk).

This is also vaguely notable as the first picture I’ve done that has been completed entirely digitally.  I have to say that I’ve used my drawing tablet for odd bits of adjustments and amendments to scanned in ‘real’ drawings (analogue drawings?) but I’ve always thought that I wasn’t that keen on doing a whole drawing on there from start to finish.  But apparently I am, which is nice.

I don’t feel like I’ve finished playing around with it yet.  I love layers.

Sorry about the post title.  I was trying to think of a witty pun (or play on words) to do with Plum Pudding.  And failed.

‘And why should you be trying to make up an amusing dessert-based joke?’ I hear absolutely no-one asking.  Well, because Plum Pudding, as well as being a type of seasonal steamed dessert, is also an agency staffed by excellent people who care a lot about children’s illustration.  Which is what they are agents for.  And now they’re now my agents too, and I am their client.  And if you follow the above link, you will see a page with some of my illustrations on.  There are also many other lovely illustrators on there, but this isn’t their blog, so I’m only plugging me right now.

Anyway, I am basically really excited that they’ve taken me on!  The horrible scabby pigeon seems to be getting a lot of love, so I’m slaving night and day over a dummy book with him as the star.

Oh, and I’ve just thought of some puns.  Meringues for the memories?  Eclair de lune?  OK, giving up now.

Gabby Grant
Create a free website or blog at WordPress.com.